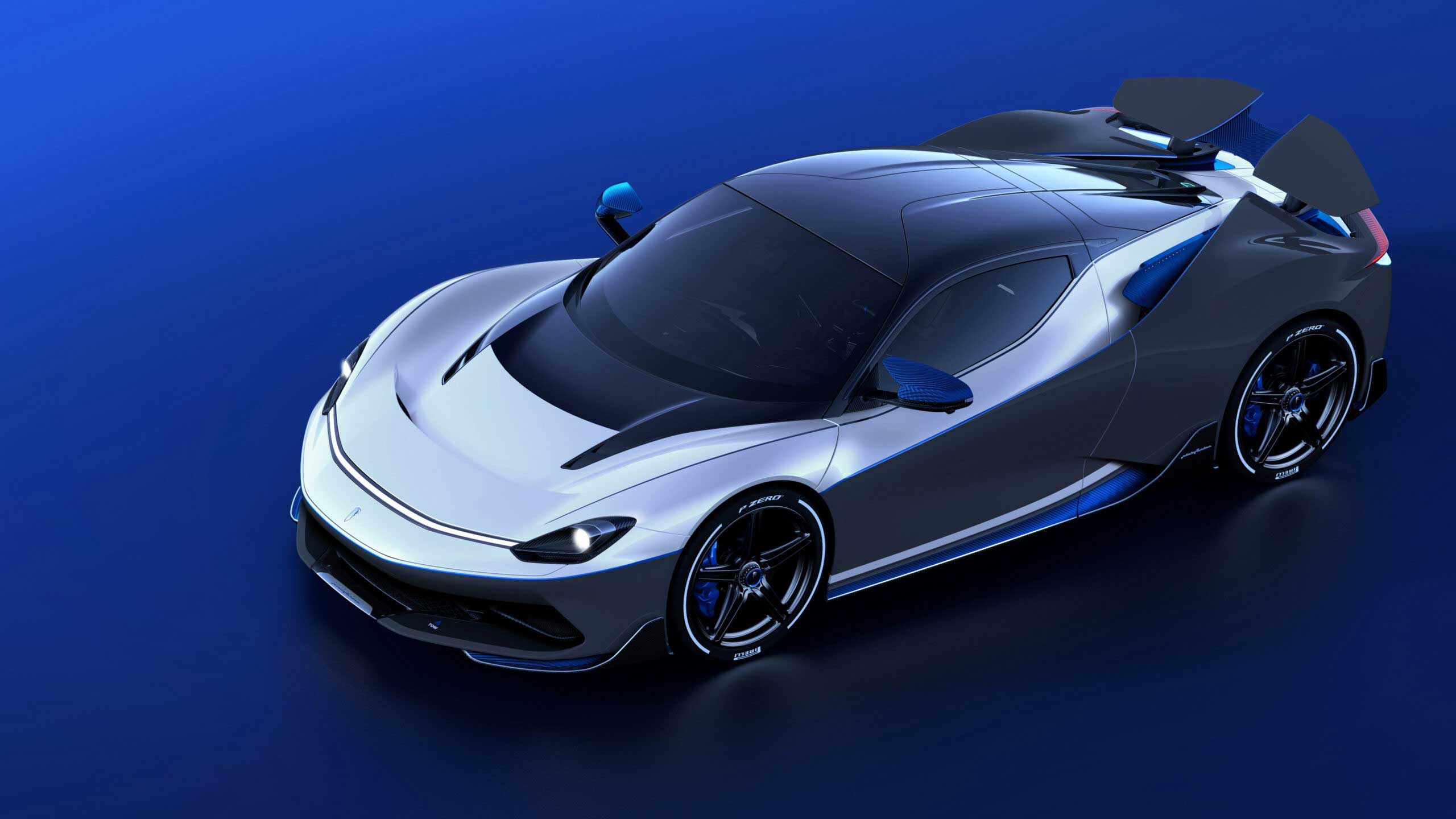 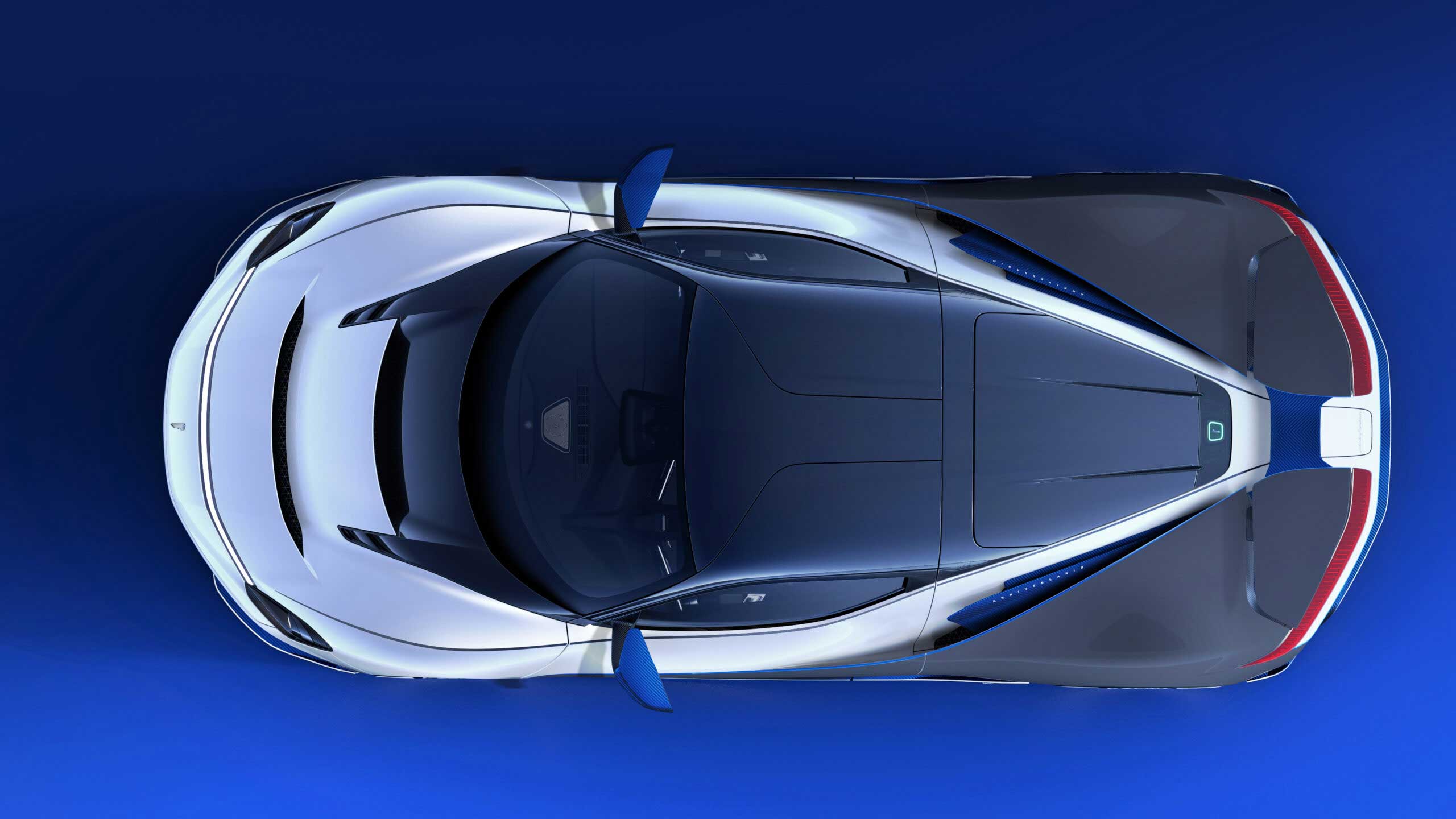 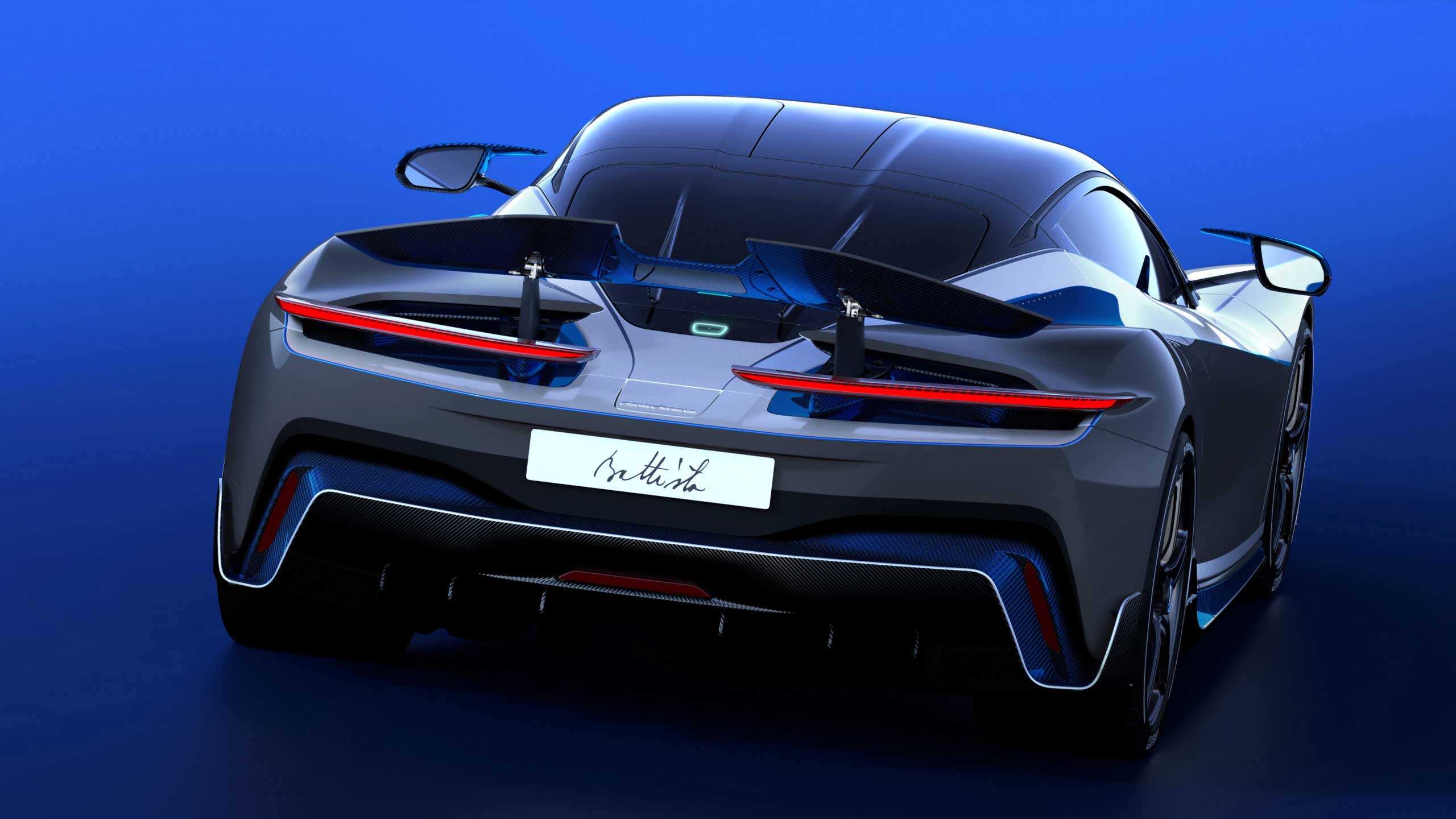 Battista Anniversario is a tribute to iconic designer Battista ‘Pinin’ Farina and marks 90 years since the legendary Pininfarina coachbuilder and design house was created. Combining beautiful Pininfarina design with unprecedented performance from its pure-electric, zero-emissions powertrain, just five cars will be available. The most powerful road car ever designed and built in Italy, Battista Anniversario will be hand-crafted by Pininfarina in Cambiano, Turin.

With just five examples to be made, the Battista Anniversario honours 90 years of Pininfarina design and is destined to become one of the world’s most exclusive automobiles. The celebratory Anniversario takes the pure-electric Battista hyper GT and adds a new level of dynamic ability and a bespoke heritage-influenced livery so perfectly integrated into the body design that it becomes part of the design itself.

Paolo Pininfarina, Chairman, Pininfarina SpA: “My grandfather always had the vision that one day there would be a stand-alone range of Pininfarina-branded cars. The Battista Anniversario, named in his honour to mark 90 years of the carrozzeria that he started, is a glorious way to link our past with the future of motoring.”

Design:
Hand-Crafted Italian Artistry at Its Most Iconic

Each of the five Anniversario cars is finished in an exclusive Pininfarina anniversary livery. It comprises a combination of three signature colours: Bianco Sestriere, the never-seen-before Grigio Antonelliano, and Automobili Pininfarina’s signature Iconica Blu. Skilled artisans at Pininfarina SpA take three weeks to paint each car, building up the finish layer-by-layer and colour-by-colour – all by hand. After each coat, the body must be disassembled so pinstripes in the three separate colours can be hand-painted directly onto the body. Three times the body must be taken apart and then reassembled during the painting process.

Luca Borgogno, Chief Design Officer, Automobili Pininfarina: “This is arguably one of the most complex hand-made paint finishes in the world. The process of creating such a finish is little short of a great artist completing an Old Master painting. The result is more than just a visual work of art. Styling, balanced with ultimate performance, produces a genuine Pininfarina: the beauty of power and the power of beauty.” 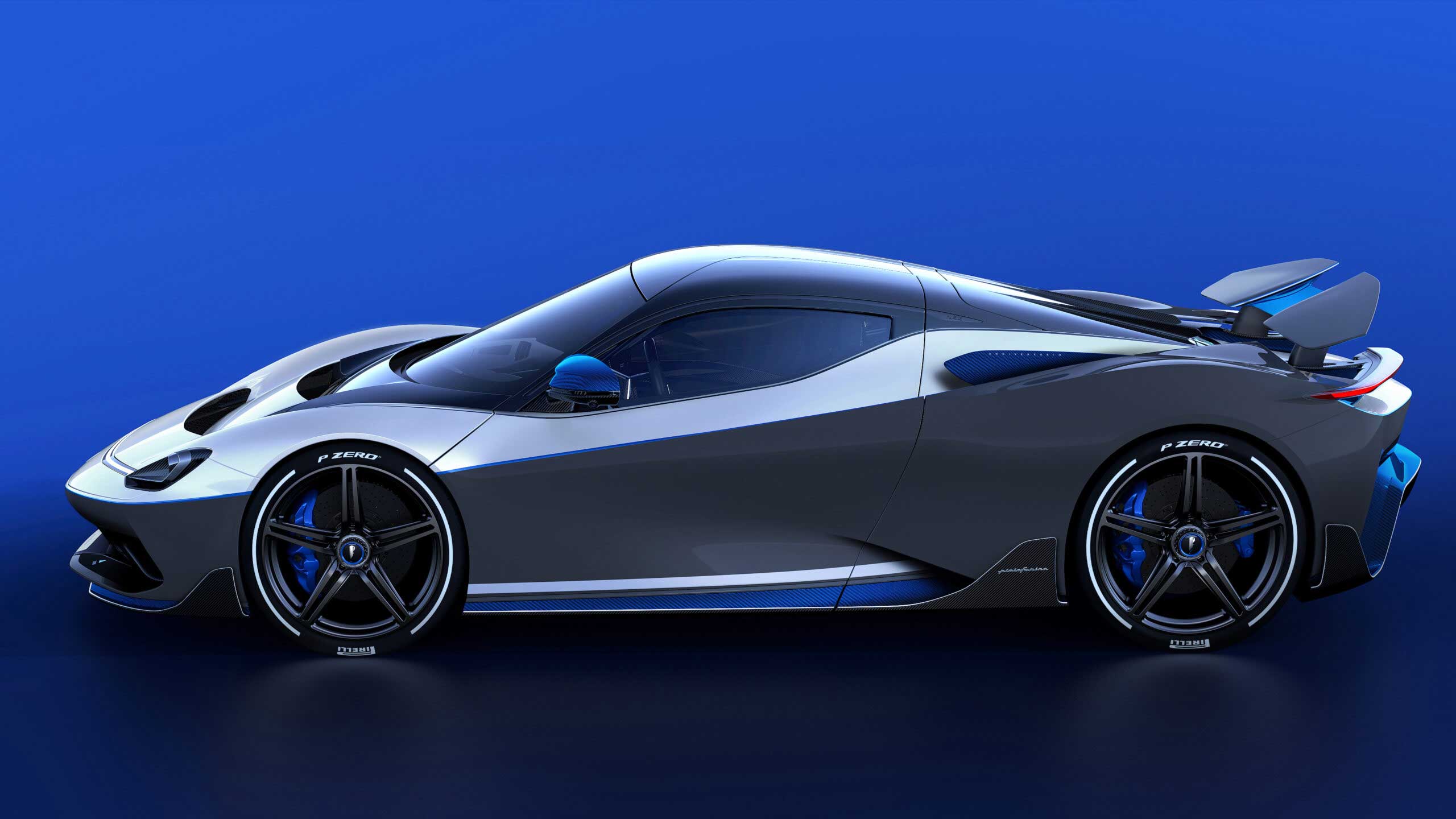 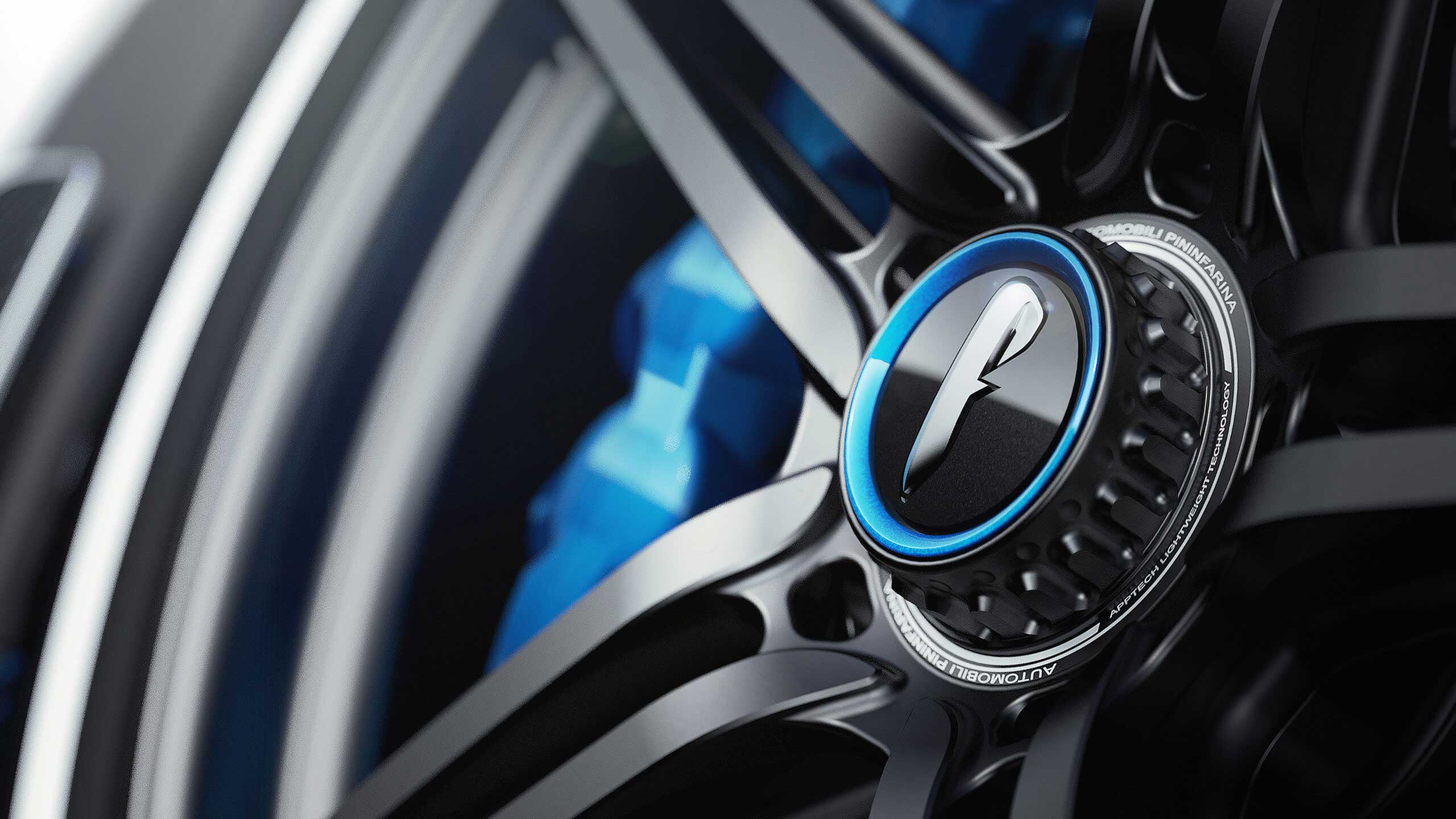 Battista Anniversario is also equipped with the ‘Furiosa’ package, comprising a revised carbon fibre front splitter, side blades and rear diffuser. Exclusively on the Anniversario, these parts are finished in a two-tone combination of exposed signature carbon and carbon tinted in Iconica Blu with pin stripes in Bianco Sestriere. Besides the exclusive livery, a bespoke rear wing, rear aero fins and other bespoke details are unique to the Battista Anniversario. The aerodynamic enhancements deliver increased downforce and greater stability at higher cornering speeds and a more dynamic balance to the car.

The Anniversario’s handling dynamism is further sharpened by a reduction in unsprung weight of almost 10 kg, thanks to a new wheel design which features centre-lock forged aluminium wheels. The rear wheels grow from 20-inch to 21-inch. Together with the performance-oriented tyres, the new rims enable the car to achieve its top speed of 350 km/h (217 mph). The optional ‘Impulso’ wheels complement the options programme available for Battista. 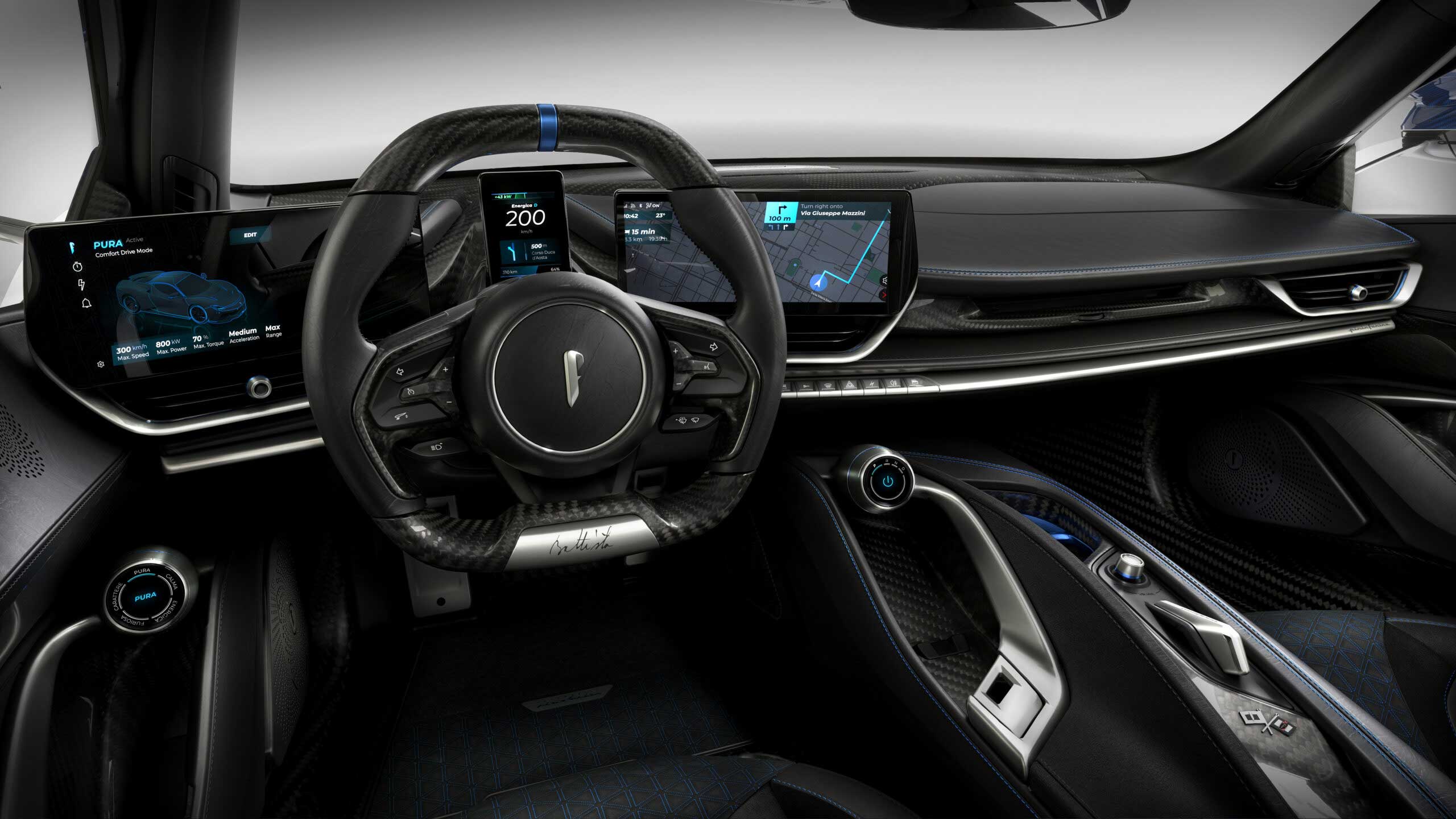 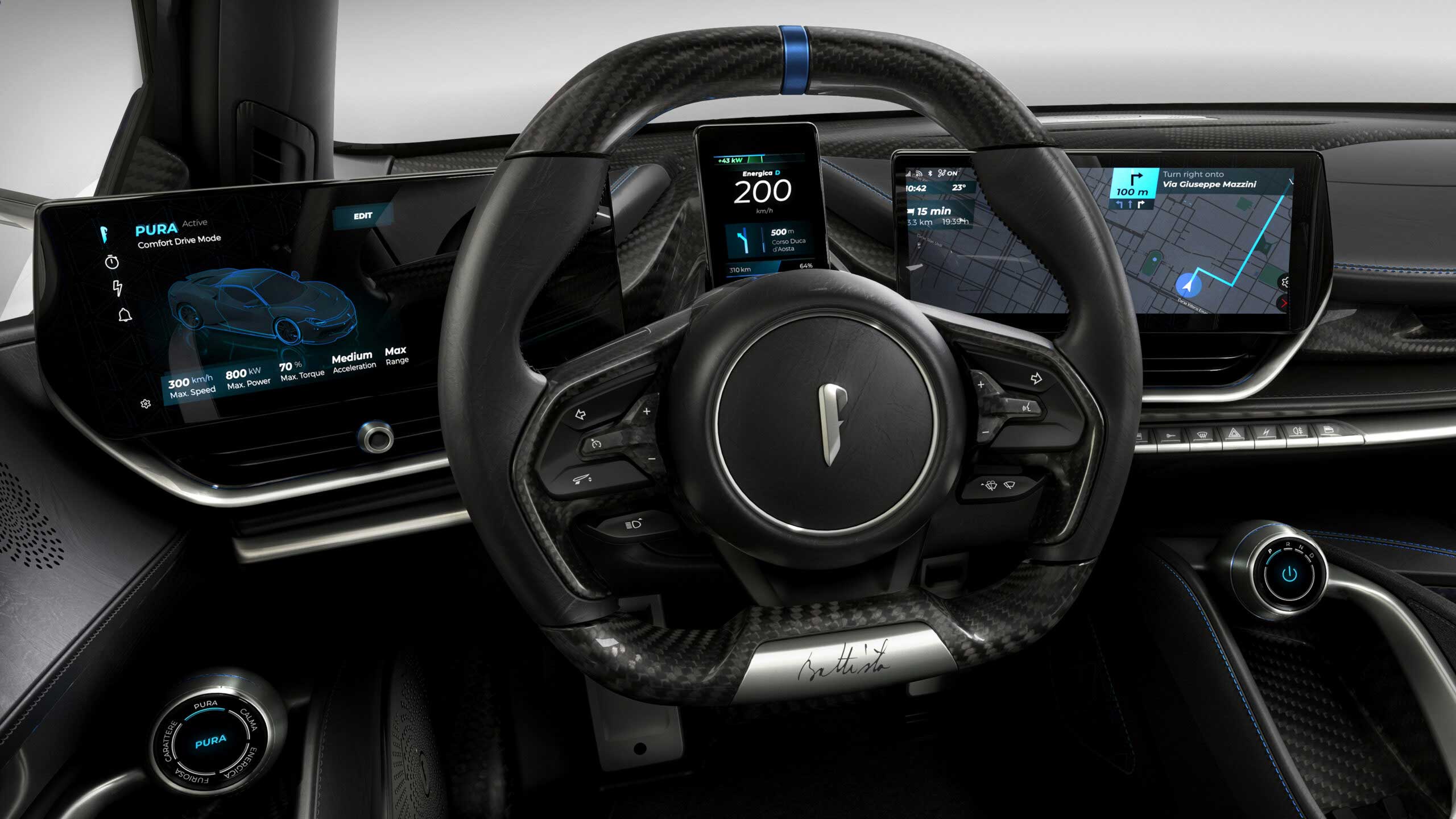 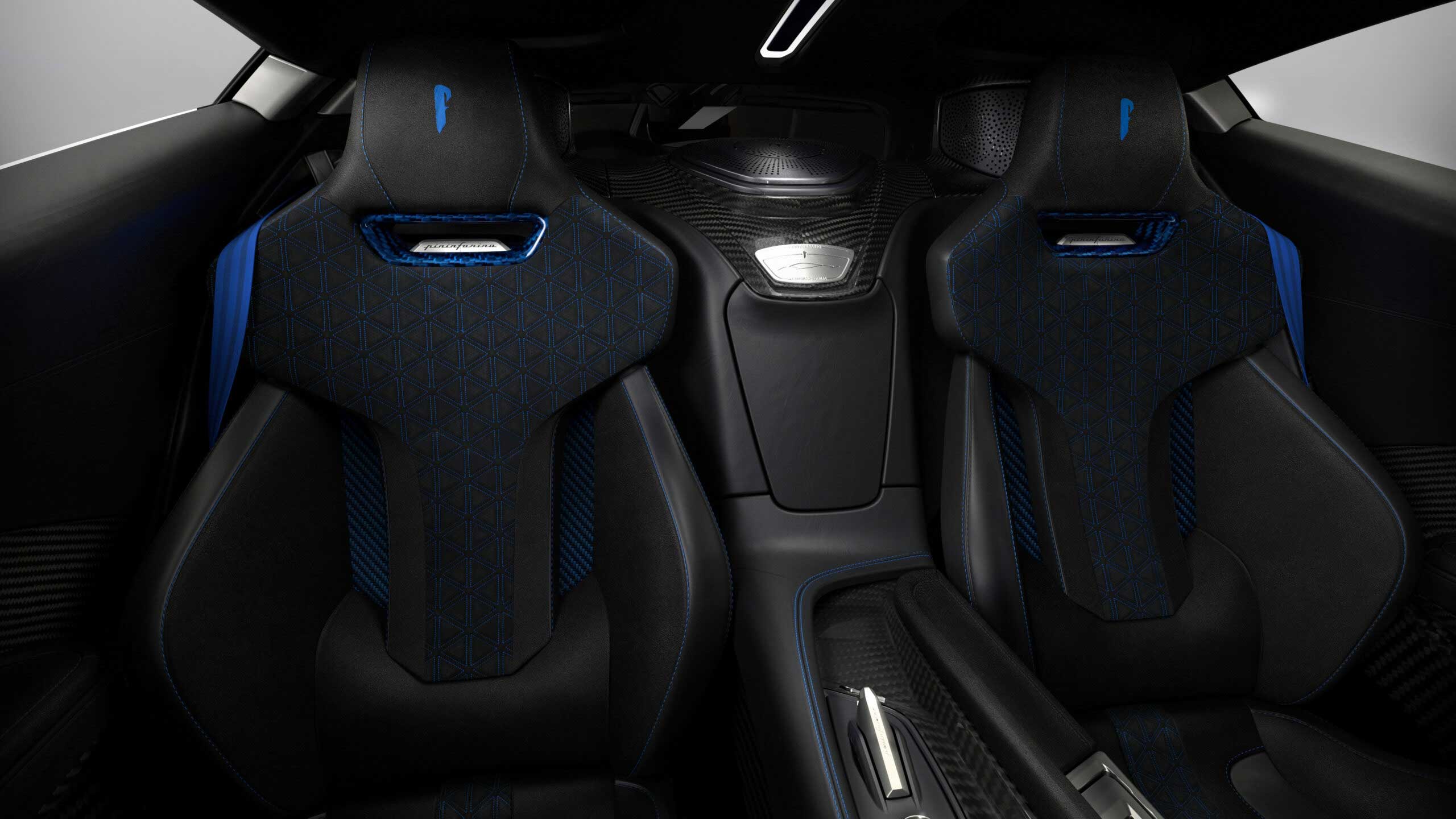 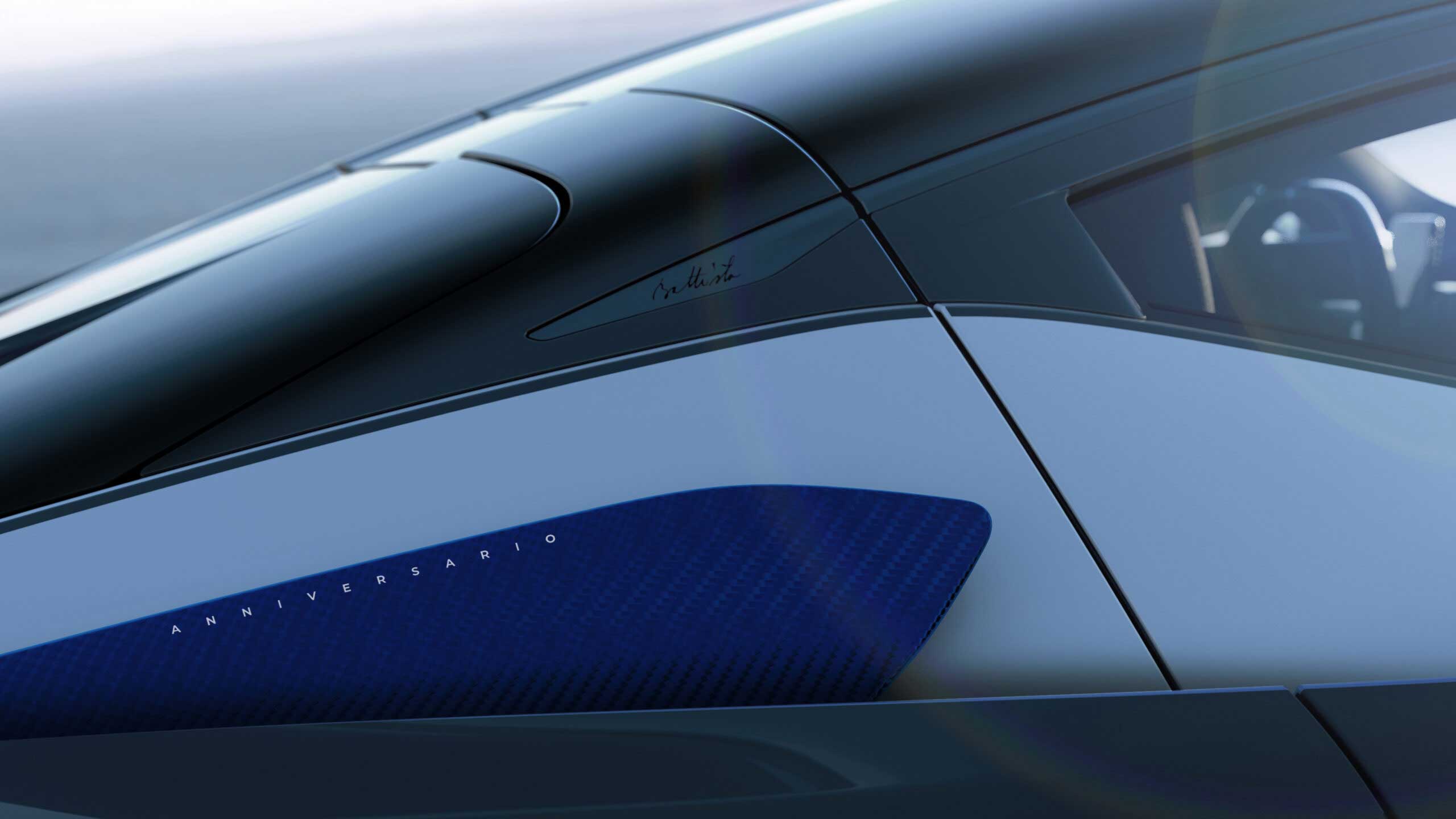 Specification:
Putting the Anniversario in a Class of Its Own

On the interior, the car is trimmed in black sustainable luxury leather and black Alcantara with stitching in black and Iconica Blu. The brushed aluminum detailing is anodized in Iconica Blu, while the steering wheel is clad in black sustainable luxury leather and exposed signature carbon. As another bespoke element on Anniversario, the cupholder retainer is finished in brushed aluminum anodized in Iconica Blu.

The new seat design, now available as an option on all vehicles, features rear backrests, seat shoulder inserts and inlays finished in exposed signature carbon tinted in Iconica Blu. Exclusive to ‘Anniversario’ is the combination of quilting in Iconica Blu and layered two-tone perforation on black Alcantara over Iconica Blu fabric.

Further bespoke Anniversario details in and around the car include an ‘Anniversario’ headlight engraving, ‘Anniversario’ script on the side wings, signature ‘Pininfarina 90’ logos, black anodized dedication door plaques with a homage to the founding of Carrozzeria Pinin Farina in 1930 and a specially engraved chassis plate between the seats. 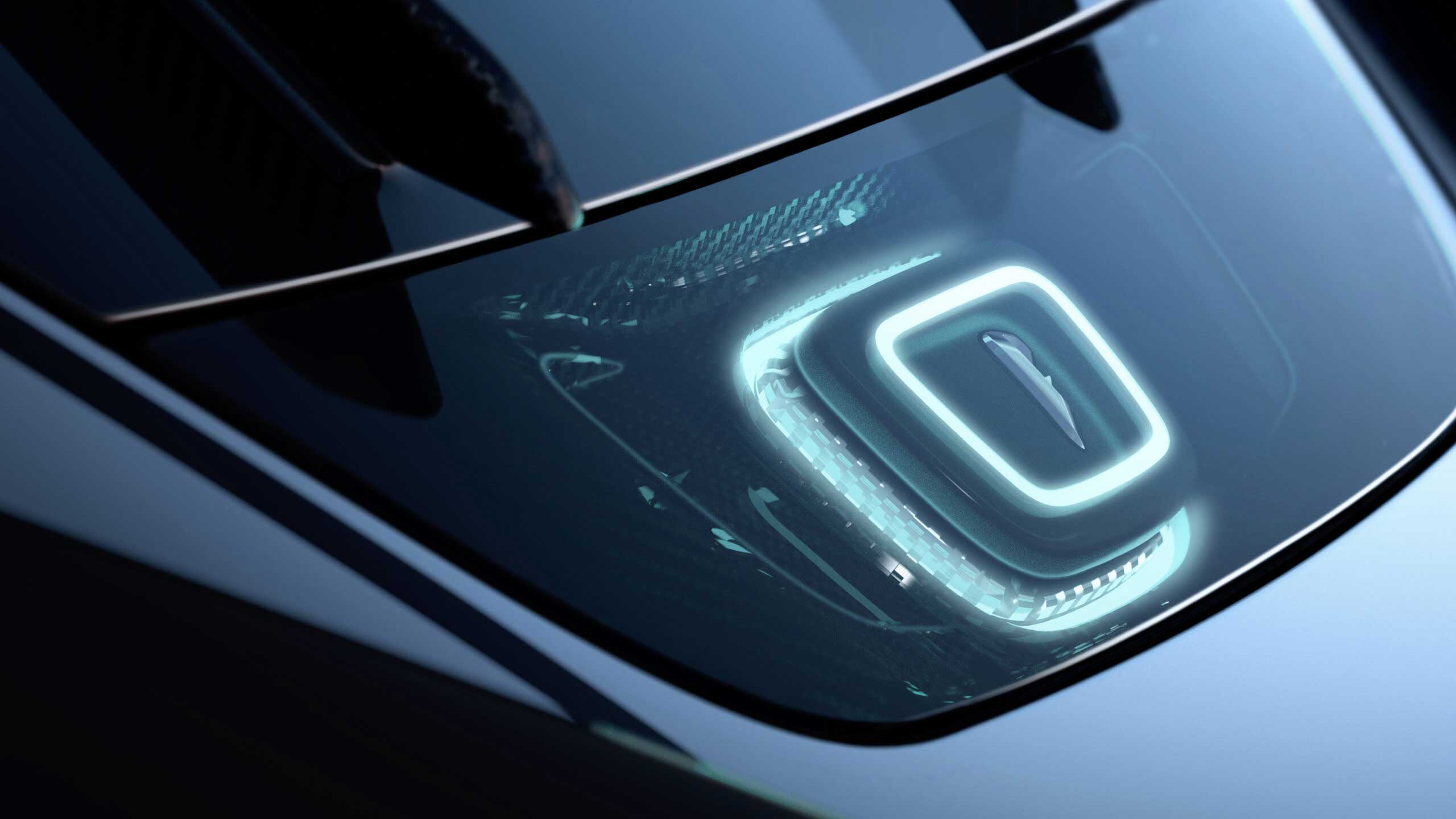 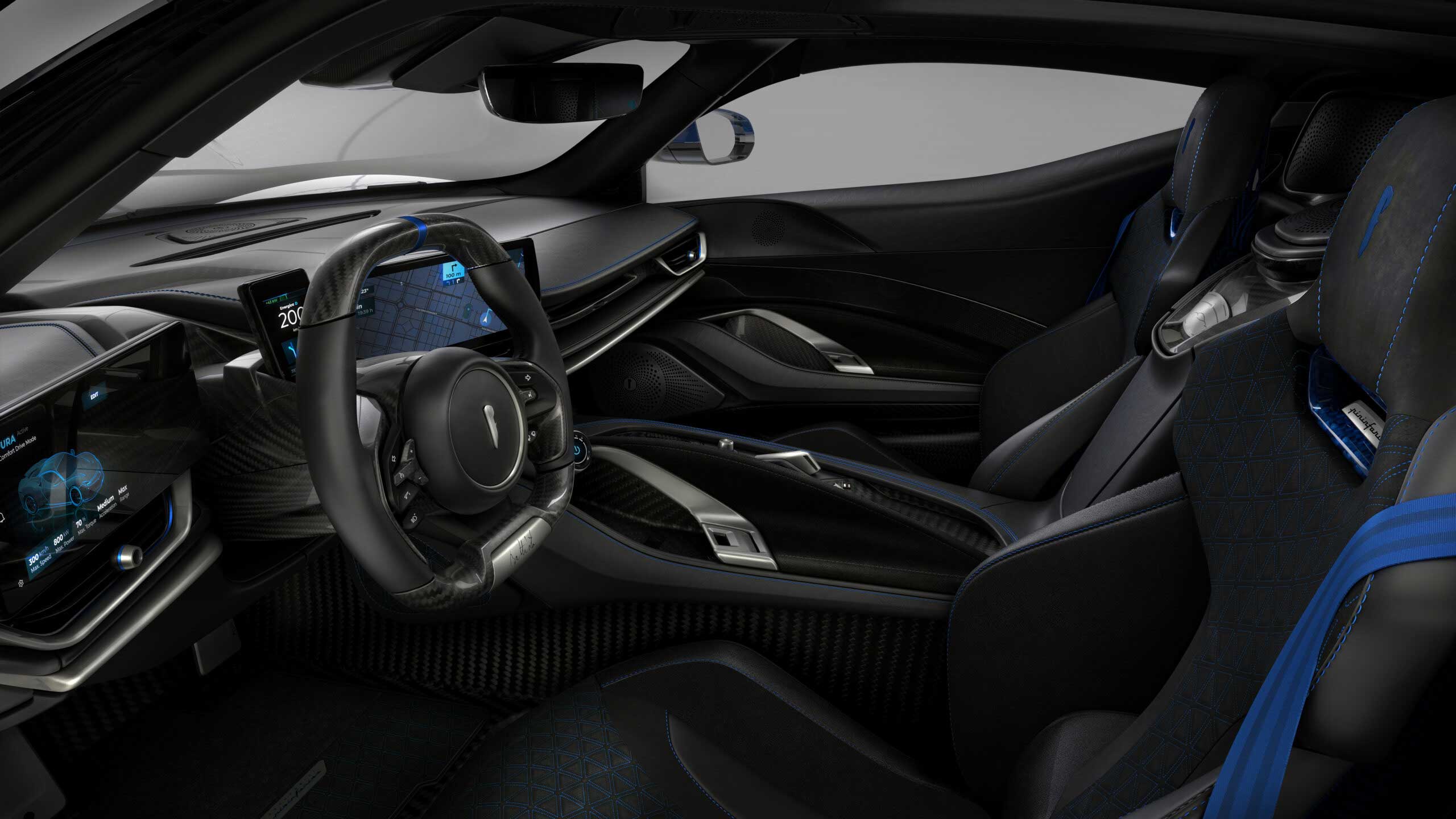 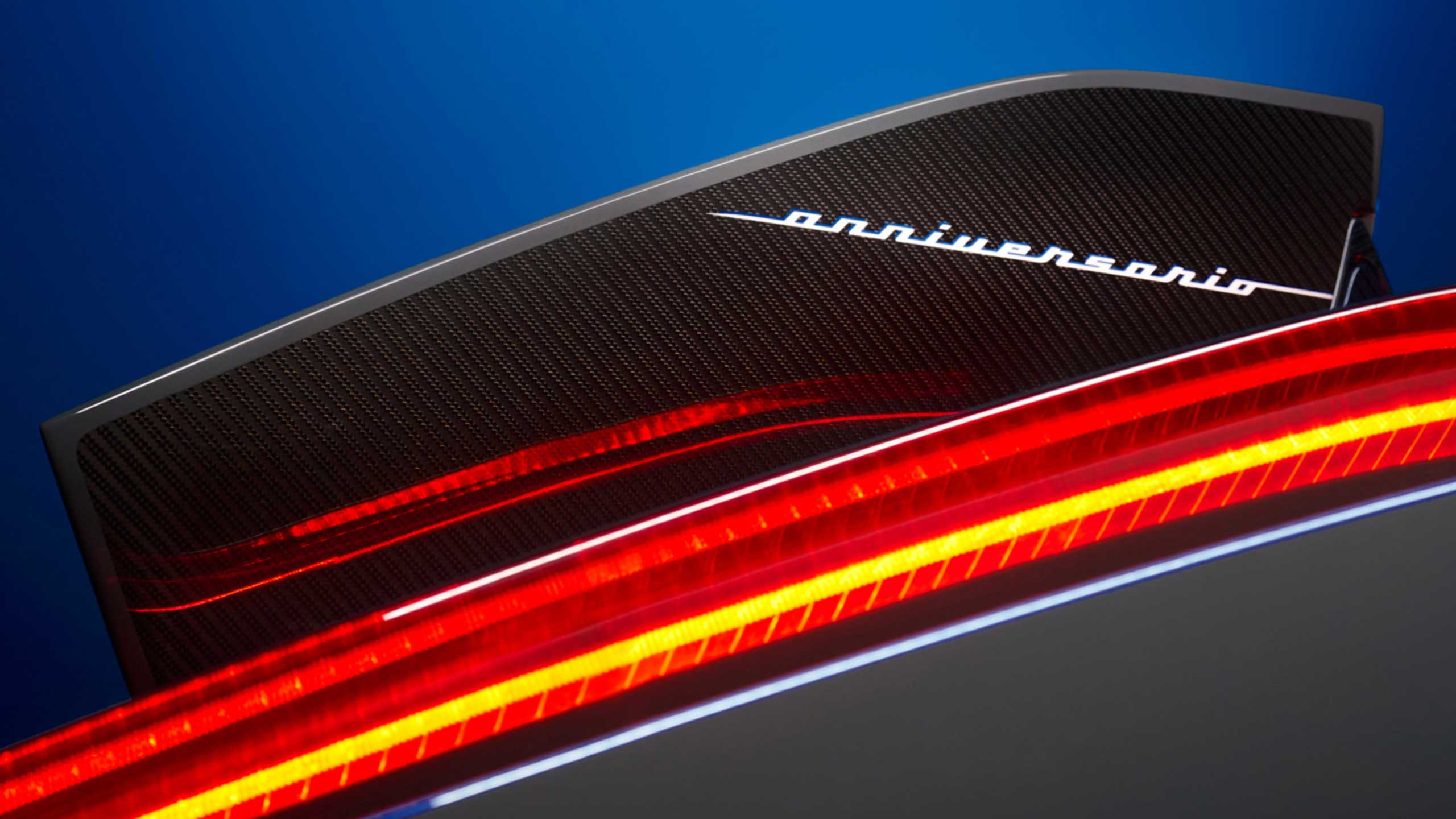